Sodium Nitrite and the Love of Bacon


Disclaimer:  Once in a while, I feature branded products on my blog, and I do so without sponsorship or remuneration. These are recommendations I make purely out of my personal preferences and experience, in hopes others might benefit from what I share. 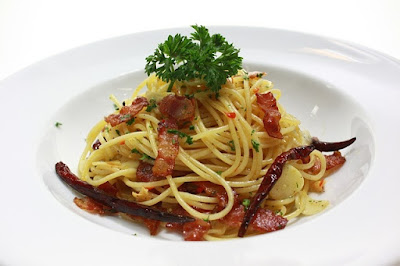 I do my best to put a gag on my “food police” attitude when I’m at parties. Oh, all right, maybe not just at parties, but also at pizza parlors, fast food joints and food kiosks. Particularly when there’s a lot of processed meat being served.

Indeed, how can anyone pass on a platter of premium cold cuts? A slice of pepperoni pizza? A bowl of bacon-rich carbonara? A hotdog sandwich? And come Noche Buena, there’s that delicious slab of juicy ham.

You can stop reading if you don’t want me ruining your holiday bingeing bliss. But take heart, studies show it is the excessive consumption that is the culprit—as in all things carcinogenic. So follow me for a few more paragraphs as I tell you about sodium nitrite.

Sodium nitrite (called salitre in the Philippines) is a compound added to food as a preservative. It is used to cure meats like ham, tocino, sausages and hot dogs. Aside from keeping these products from spoiling, it also impedes the development of the botulism bacteria, and it gives the meat its sumptuous pink color.

Research, however, has indicated a link between high intake of processed meat and colon cancer, as well as Childhood Type 1 diabetes in infants if their mothers consumed large amounts while pregnant. There are other risks which you can easily find with a quick search.

But then, there are also studies indicating the contrary. That all is good and safe—and even beneficial to your health—regarding that stuff you buy in large amounts. These findings say it might be something else in the processed meat that could be the cause of cancer and is not the sodium nitrite.

I, personally, can pass on the pepperoni pizza (there’s lots of other yummy pizza selections, or I can simply take out the sausage and eat the rest). A once-a-year celebration with Christmas ham is acceptable, I would suppose. And I have no problem skipping the hotdogs (I find their extreme redness abnormal). But I simply cannot live a happy life without bacon. 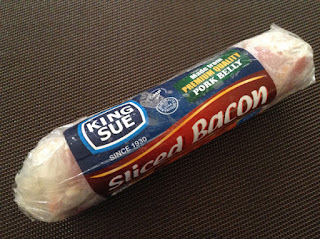 As it turns out, there is some heartening news. Sodium nitrite’s negative effects can be lessened when it is not exposed to high temperatures. So when I do make carbonara, it takes me an incredibly long time to cook the bacon (super low heat for nearly an hour)—but it gives me extra pleasure knowing that everyone who partakes of my pasta is spared some of sodium nitrite’s assault. My favored supermarket brand is King Sue. 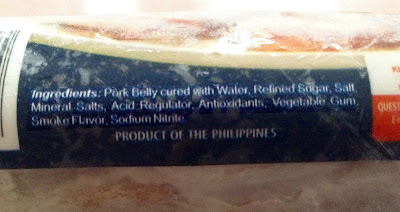 Alas, it still has sodium nitrite as one of its ingredients, but did you notice something else? It has no MSG! So far, it’s the only brand I know, locally, to not have it. (I belong in that percentage of the population that gets palpitations after eating MSG-enhanced food on an empty stomach.) That’s why it’s the only branded bacon I buy.

On that note, I would like to make a special plea to the local makers of bacon. If it would be possible for you to include some Vitamin C in your bacon as research shows how its addition practically stops sodium nitrite from turning into the bad stuff in our tummy. Do shoot me a message if any of you know of any bacon with ascorbic acid available right here, right now.

Posted by GreenHearts at 4:34 PM

Comments
Get updates on green-hearted living, straight into your email inbox. The service is FREE!